Learning to pivot: What athletes can teach educators about adapting to change.

Not many people grow up wanting to be a bobsledder. And I definitely wasn’t one of them.

What I did want to do — really, really badly — was compete in the Olympics.

It started when I was 11 and competed in the Junior Olympics in track and field. That lit the spark in me.

In high school, I became a national champion in track and field, and ultimately chose to take a scholarship at the University of Florida to compete as a decathlete and pursue my degree in education and exercise science. Because I knew that if I could go to Florida and be successful, I could go to the Olympics.

Every single season was ended for me by some kind injury. After five years of recurring injuries, I feared that maybe my dream was dead in the water.

In August of 2000 I sat on my couch in Gainesville, two days out of Tommy John (elbow) surgery. I was miserable, defeated, and heavily medicated.

Then, I remembered an old coach and mentor who used to compare me to a great bobsledder he once knew. It had seemed random (and kinda ridiculous) at the time. But now I wondered: maybe I could bobsled?

I didn’t hesitate. I wrote a fumbling email asking the U.S. Olympic Committee about their requirements to try out for the National Bobsled Team. Then, without a second thought (or a single edit to my cringe-worthy typos) I hit send.

The letter was messy and imperfect and maybe a bit naive, but I got one very important thing right that day: I didn’t let the “how” get in the way of my “what”.

My “what” being my goal — get to the Olympics. I didn’t want to compromise on that.

But how I got there? That part was flexible. I thought I’d do it through decathlon, but when that pathway didn’t work out, I tried another one.

I’m sharing this story with you because I think there are a lot of parallels to what educators are dealing with these days.

Many of the existing, proven teaching pathways are changing. Educators are being asked to radically shift how they do things: whether it’s online learning, changes to class sizes, pandemic safety protocols, evolving student needs, adapting curriculum, you name it. How we teach (and how kids learn) is in flux.

But maybe the “how” doesn’t matter as much as staying true to the goal itself.

Whether you call it student achievement or growing the next generation of leaders, I think it’s safe to say that the goal of education is to help young people learn what they need to succeed.

This is an approach that’s familiar to athletes, though I used to simply think of it as “getting better”. Each day on my way to the Olympics I’d look for things to do or improve upon that I knew would make me better. I knew, for example, if I ate an extra egg (6g of protein) I’d get a little bit better. If I got an extra hour of sleep (more REM) at night I’d get better. If I tweaked my training based on the weaknesses my coach identified (get stronger) I’d get better. And so on.

Since co-founding Classroom Champions over a decade ago, I’ve learned that this isn’t just an athlete thing. It’s actually a set of social-emotional skills that can be learned and taught.

Among the five core SEL competencies identified by CASEL are self-awareness, self-management, and responsible decision making. Each of these are essential in the pursuit of any goal:

I didn’t realize it at the time, but that’s exactly what I was doing when I penned that email to the Olympics Committee.

And, ultimately, by practicing the above three we can create a growth mindset within ourselves, as adults. Newly published research, supported by Classroom Champions, shows that teacher growth mindset has an important impact on student growth mindset.

So by demonstrating these behaviors and mindsets in ourselves as educators we can pass them on to our students over the course of the school year.

Now, of course, it’s clear to me just how important these skills are for anyone pursuing a goal (these skills are taught by athletes and synthesized in the embedded 8 pillars of the SEL Foundations curriculum, Mentorship+ SEL program, and the newly launching free Champion Check-In program and resources at Classroom Champions). They’re essential for all of us — adults as well as kids. And I believe they’re especially important for educators who are facing the daunting task of adapting to a whirlwind of change. It’s why dozens of districts and thousands of schools have adapted Classroom Champions as a SEL or mentorship program and curricula of choice… something that I’m really proud of our athletes for!

The more unpredictable and turbulent life gets, the more we need to keep practicing our pivots.

Oh, and as you might have guessed, USA Bobsled replied to that email I sent back in 2000.

They wrote me back the very next day. Essentially they said yes! (obviously) with some areas that I needed to work on – and leverage that growth mindset.

I started training right away.

PS. If you’d like to read the letter I sent, here it is — typos and all.

To whom is may concern,

I was writing in regard to inquiring as to what your standards are for accepting athletes to try out for the National Team. I am ignorant in this respect to the sport. I am a former Decathlete at the University of Florida (originally from Buffalo, NY) and am looking for a new sport to be successful in. I was known as a fast, powerful athlete in college and have always though and been told that Bobsledding would be a great sport for me. I have been looking all over the internet for some pre-requisites for speed, power, and the like, but have come up empty handed and just decided to inquire.

In the weightroom I have (1 rep max) cleaned from mid-thigh 125 kilo’s and Squated 450lbs. We do most of this training in the early fall of conditioning for track, I am sure if I simply trained for these attributes I could surpass all of my lifetime bests in them. If there are any other tests that are to be performed, I am sure in that the past few years of track and field training I have contested them.

I am 6’1”, 190 lbs currently, but have been training in a different manner that the pure speed and power athletes would in a bobsledding environment. Part of my training involved distance and some slower movement, hurting my speed and power. These marks may not be suitable for National Team bobsledding, but if they are even close I am very interested in learning more and training for the sport.

Any information that can be given to me regarding this would be very appreciated, or if there are set standards, a copy of them would be great. Hopefully I will here back from you soon and thank you for the opportunity. 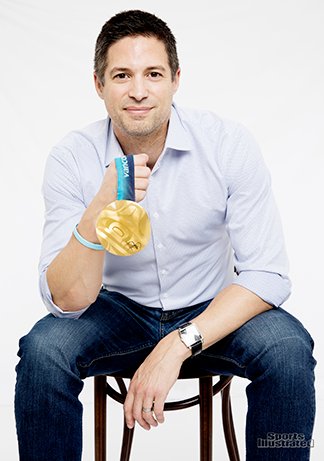 Steve Mesler is the co-founder of the international award-winning non-profit SEL and mentorship organization Classroom Champions. He is also an Olympic gold medalist and 3-time Olympian in the sport of Bobsled and a member of the United States Olympic and Paralympic Committee Board of Directors.