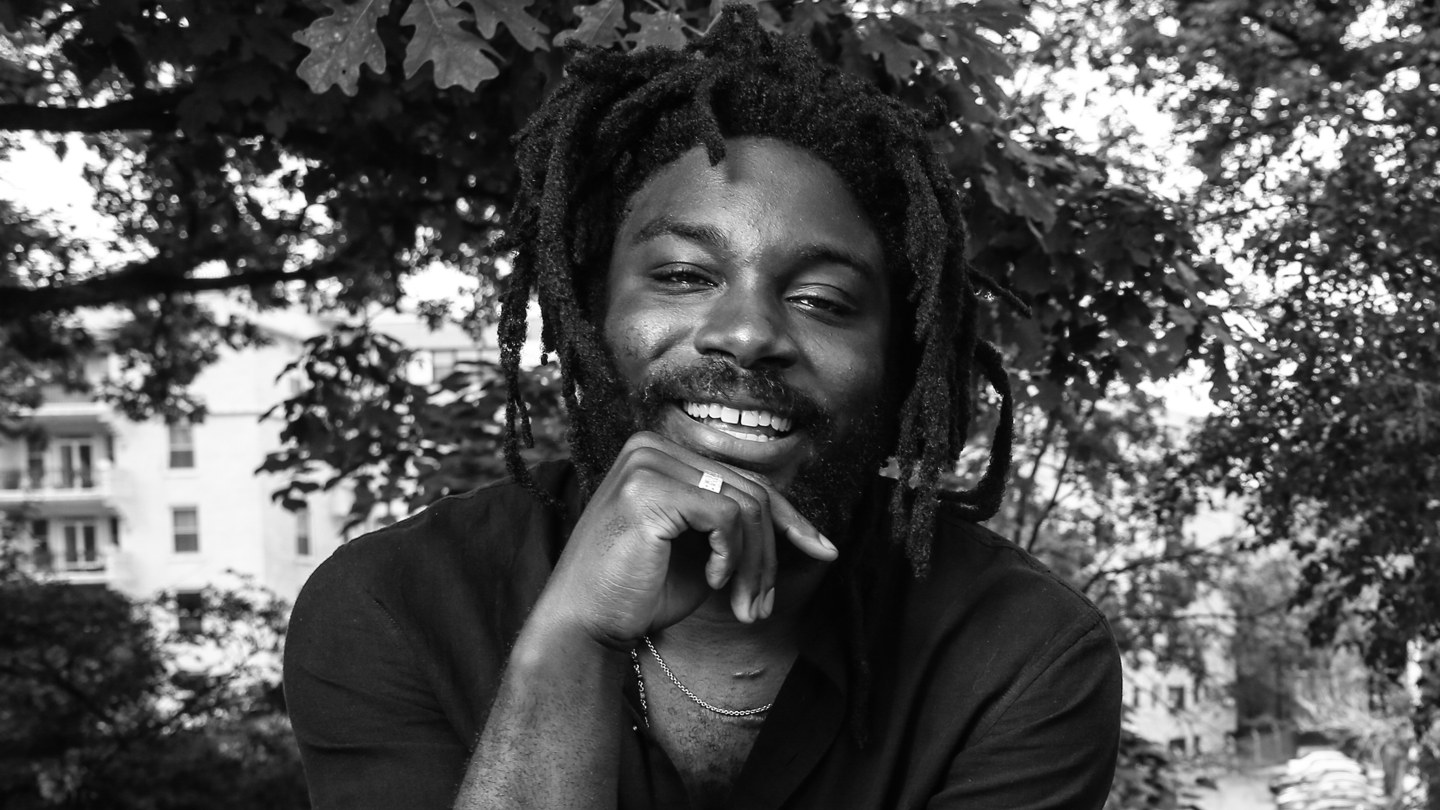 We got a chance to interview one of our featured speakers, Jason Reynolds, D.C. born writer and New York Times author of many books, including When I Was the Greatest, Boy in the Black Suit, and All American Boys. For the 2020 event, Reynolds’s session “Stamping Out Racism” will discuss tearing down racist ideas in America. His new book, Stamped: Racism, Antiracism, and You, is a remix of the National Book Award-winning Stamped from the Beginning by Ibram X. Kendi. Advertised not as a history book, Reynolds’s new work is aimed at creating an honest conversation with young people.

In this interview, Reynolds discusses his background and influences, and the importance of keeping it real.

Q. You completed reading your first novel at the age of 17, what was it about that book that made you want to finish it?

A. The book was Black Boy by Richard Wright. At the beginning of that book, the main character burns and sets the curtains on fire which burns the house down. That’s all it took… for the exciting part of the book to start early. It gets you right from the jump and at that moment I realized it’s not that I hated reading, I just hated to be bored. I didn’t want to have to wait 60 pages to get to the good part. I managed to get sucked in, like a movie, I managed to get sucked in right away, and that’s what that book did.

Q. What was it about hip-hop that influenced you, and who were you most inspired by?

A. Everything about hip-hop, I mean number one, they looked like me, they talked like me, they dressed like me, and they were telling stories that I could directly connect to in a language that felt familiar. They also were irreverent and that always sparked young people, right, the idea that they were doing what they wanted to do and making music that blended together other music and other styles. All of those are what really inspired me. For the most part, it’s just about representation, we were finally realizing that my generation had a voice and people from my specific background, my cultural background, suddenly had a big voice and it was making people uncomfortable…I loved a lot of rappers but the one that I always talk about faithfully that helped shape me, the first tape I ever owned was Queen Latifah’s ‘Black Reign’. Queen Latifah was a big deal, hearing her voice and what she was saying about the neighborhood and very normal things for people growing up in black communities, it just made me feel big, it made me feel seen.

When asked if story-telling in music has changed, Reynolds expressed that music hasn’t changed, rather the business of music has changed. With influence from the internet, pop culture and mass media, music may feel different but the storytellers are still there. He states, “we also have to remember that sometimes the story doesn’t come from the language, sometimes the story simply comes from representation.”

Q. What are some ways in which you authentically engage and connect with young people and what’s the importance of doing so?

A. I don’t talk about books, ever. I mean, think about it, I go to schools, why would I go to schools to talk about school? They’re already there. Their teachers are having those conversations, their principles, and their parents. One thing I like to talk about is everything that’s not about school. I go in and we talk about food, and sneakers, and rap music, and all these other things I did growing up. I basically tell them my own personal story. I tell them very funny, sad and triumphant [stories]...What we respond to is storytime. Instead of you telling me what to do, let me tell you what I’ve been through and who I am because if I can get you to believe me, you’ll read everything my name is on.

Since 2014, Reynolds has published 12 novels. When asked about how he became such a prolific writer, he explains it’s about consistency, discipline, and having a wild and vivid imagination.

Q. Did you ever struggle to find your place in the literature world?

A. Of course. I’ve been in this industry since I was 21, I’ve been around for a long time. I’ve seen it change, I’ve seen it grow, I’ve seen it stunt, I’ve seen all these things happen over the last 15 years. I remember after my first book, when I was 21, nobody really wanted to touch the things that I was making, even with When I Was the Greatest, when it went on submission nobody wanted to publish it, everyone was afraid of it. No one thought there was a market for that kind of book that was about black kids in Brooklyn, which was weird because there’s always a market for anything that’s big and anything that’s honest… [With] All American Boy people were terrified of that. What are they going to do about a book on police brutality? Publishers weren’t scared but there were teachers, administrators and superintendents who were afraid, which makes me believe the book truly had power. Anybody who fears things like that fears the weight of the thing… I know how to be me and I know how to be honest, and I think that human beings should be respectful of other human beings even if they’re different, and that’s proven to be the case when it comes to many people.

Q. What are some important messages or themes that you try to tell young people through your work?

A. I’m not trying to give away messages, I’m not trying to teach nobody nothing. I think sometimes there are lessons that I have learned based on scenarios and circumstances but I’m not a parent or teacher or any of those things. I’m very careful about the idea of passing on some sort of message. Ultimately though, I just want young people to feel cared for, I want them to feel like somebody sees them for who they are, not who they are projected to be. That means more to me than any lesson. They walk away from that book feeling emboldened, feeling seen, and there’s no lesson in the world more important than self-actualization...

Q. Why did you decide to “re-mix” Ibram X. Kendi’s, Stamped from the Beginning, instead of other nonfiction books that historically talk about racism in America?

A. Racism in America has been happening from top-down when really it should be happening from the bottom up. It's one of those trends to protect young people from the discussion of race but we should be preparing them for the world in which they are about to inherit. And if we can prepare them properly then they can actually change and shift the way our world functions but we have to give them the language, the information, the history so they can have unemotional conversations. Conversations rooted in fact, rooted in history, not rooted in systems, not in people. They’re there talking to their partners and friends when they get older, it doesn't have to be a huge and uncomfortable conversation. And that if it is uncomfortable that there’s comfort and [it] feels normal enough to still have healthy discourse, and we can actually change, which we have yet to do because we’re still afraid to come up from the frame which has been the frame to sort of acknowledge the certain history in this country, a wonderful place, a beautiful place, in which we live, but it's a place that came at a horrendous cost that we have yet to rectify and reconcile, that's all.

Q. Do you think it’s important to be as transparent as possible when talking about these issues revolving racism to a younger audience, and why?

A. Yes, I think that we do young people a great disservice by believing they can't handle the hard stuff. When most of those young people have already experienced that stuff. I think it really speaks to the arrogance of adults that we sort of tap dance [around conversations]... It's about us being afraid to figure out how to explain the complex issues, it has nothing to do with their fear, it's about our own insecurities. We need to honor them, and arm them with the resources to have these discussions and be completely transparent.

Q. History was one of my least favorite subjects in school because the teaching method felt very disconnected. If you could teach one subject, which one would it be and what would your teaching style be like?

A. I would teach English. I did teach English at the graduate level. My style is a part of my life, I am who I am all the time, in every environment. My teaching style is one that is super loose and all about the experiences of learning and creative learning. We can’t continue to teach language arts and leave the arts part out of it. So, instead of teaching this idea of a “proper” English, instead, I would teach translation… Not just ‘I’ before ‘E’ except after ‘C’, that’s fine, but...let’s dig into the things [students] are actually interested in...

Don't miss out on the session, “Stamping Out Racism”, and Jason Reynolds book, Stamped: Racism, Antiracism, and You, expected to be released May 10, 2020.

This is a shortened version of a more detailed interview. Get to know more about Jason here.